Al, the last of seven kids, was one of those inquisitive kids that never stopped asking questions about how things work. This fidgety boy with a hearing problem was maddening to his early teachers who described him as “addled” (confused).

The Mother of Invention was a Teacher.

His Mom, a former teacher, was furious, removed him from school, and took responsibility for his education at home.  Nancy Edison should have gotten the Mother of the Century award for raising the kid that ultimately filed 1,093 patents and defined the standard of living we enjoy today. 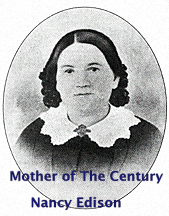 “My mother was the making of me. She was so true, so sure of me, and I felt I had someone to live for, someone I must not disappoint.”

Thomas Edison started his career as an inventor in Newark, NJ and had early success fixing stock ticker machines, voting equipment and telegraphic devices. In 1877, he gained instant notoriety with the invention of the phonograph, which paved the way for the electric guitar, eight track player and eventually the Ipod. (He was one of the first to Think Different).

“Genius is one per cent inspiration and ninety-nine per cent perspiration.”

His first device recorded on tinfoil on a grooved drum. The sounds were heard when a needle ran through the groves as it turned round and round. He thought this was cool, his favorite invention, later we would think it was pretty groovy too.

After knocking that one out of the park, at age 41, he had a brilliant idea to improve the electric light bulb. The light bulb had been invented in England by Sir Joseph Swan but had issues, well, producing light. Tom invented new filament, added some glass, removed the air and voila- after thousands of hours trial and error, eventually developed a 16 watt bulb that would burn for 1500 hours.

“We will make electricity so cheap that only the rich will burn candles.”

He thought it would be the end of burning the midnight oil but since society thought electricity was a passing fad, and no one had wires to their homes, he had to invent other stuff to sell the bulbs.  He went on to invent the electric generation and distribution business to allow his invention to be adopted by the masses. He borrowed money from guys like JP Morgan and the Vanderbilts and created the first investor owned electric utility.

By the 1890s hundreds of towns throughout the world had Edison power stations. (New York was the first city to be lit by Edison generators in 1882).

As if that wasn’t enough he went on to invent the alkaline battery, cinema projectors and a thousand other inventions- about one every 2 weeks!   Edison built 14 different companies. In 1890 Edison established the Edison General Electric Company which after several mergers became GE- General Electric, one of the most well respected business success stories of all time. Not bad for a school dropout who was nearly deaf.

“ Opportunity is missed by most people because it is dressed in overalls and looks like work.”

Rare video of  Thomas Edison at his research factory

Signup here for eNews from Flotech