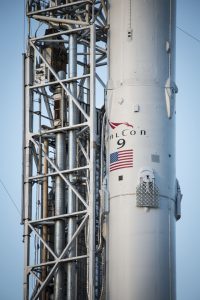 SpaceX’s customer for the DSCOVR mission is the United States Air Force, in conjunction with NOAA and NASA.

The DSCOVR launched today, from Space Launch Complex 40 at Cape Canaveral Air Force Station, Florida. The DSCOVR satellite will be deployed approximately 35 minutes after liftoff. In this flight, the Falcon 9 rocket will deliver the DSCOVR satellite to a 187 x 1,241,000 km orbit at 37 degrees.

SpaceX had to pass on “landing” the rocket’s first stage on a specially designed drone barge in the Atlantic, as the surf was up. SpaceX reported waves “up to three stories high crashing on the decks”. Yikes, I can’t imagine trying to catch a burning hot rocket stage, on a boat in the ocean, which has never been done before.

They will have to settle for a soft landing this time and hope that next time they have another opportunity to hit the barge. SpaceX has another launch scheduled for February 27th.

You have to applaud the innovative spirit and sheer determination at work on the SpaceX team.

Congratulations on an outstanding launch.

“If one can figure out how to effectively reuse rockets just like airplanes, the cost of access to space will be reduced by as much as a factor of a hundred.  A fully reusable vehicle has never been done before. That really is the fundamental breakthrough needed to revolutionize access to space.”

SpaceX is a Flotech customer.