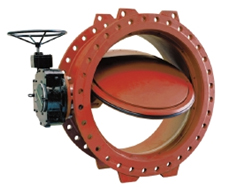 After repeated failures with AWWA resilient seated valves and coated discs this Florida power plant installed (Keystone) RMI triple offset butterfly valves, with Ebonite lining, at their new combined cycle plant.  The Ebonite performed like Kryptonite to the super clams in this power plant intake service.    About 10 years ago a major power company was planning a new combined cycle plant in Florida.

Their engineering and plant support group were not pleased with the short service life they were seeing with existing water circulating valves in their systems. The resilient seated valves with coated discs and AWWA type butterfly valves were wearing out fast . Problems with coating delamination, clams and salt water ingress in the shaft/journal areas of the AWWA valves led them to investigate other types of large OD valves

Flotech introduced them to the (Keystone) RMI valve, available through 120 inch manufactured by Pentair in Breda, Netherlands. The RMI Dubex butterfly valve is a triple offset, Ebonite lined, dry shaft valve specifically designed to handle salt water applications. The Ebonite is inert to chemical attack, has an 80 Shore D hardness for abrasion resistance and can be machined to assure good contact surfaces. The Ebonite inhibits the adhesion of sea life such as clams, shells and barnacles. After the autoclave application of the lining the surface of the valves is 100% spark tested to assure a homogeneous surface which is crack free and non porous. The valve has a dry shaft construction preventing salt water from entering the shaft or journal area.

The company was so impressed with the RMI valves they have since used it on additional plants in their system. As for the Ebonite hating irritated mollusks -they have clammed up.

Flotech has a long history of building and repairing large diameter specialty gate valves used in the marine industry. These 54″ valves are used for seawater scoop injection aboard ships. Recently we also repaired several 18″ and 36″ flood drydock valves for  Newport News Shipbuilding . Large drydock valves are constantly exposed to seawater, while not under a tremendous amount of pressure, they have demanding service requirements. Flotech has rebuilt valves for drydocks in the Pacific Northwest, Panama canal and East Coast shipyards.

Bad stuff can happen when drydock valves are not properly maintained, see the article below about a failed check valve.

Shipyard blames valve failure for sinking dry dock, capsizing tugboat that was inside.

A tugboat capsized inside a Seattle dry dock after the dock partially sank due to a faulty check valve.

The 127-foot ocean towing tug Invader, owned by Crowley Maritime, was in the Vigor Industrial yard for routine maintenance, which had just been completed.

Shipyard personnel discovered the accident at approximately 1200 on March 18. Apparently the dry dock had been taking on water and sank until it reached the seabed. As it sank, the tug capsized on its starboard side, and like the dry dock, was partially submerged.